His real name was Karam Ellahi and he was a son of Ghulam Muhammad.By caste he was an Arian.He was famous by the name of Sain Kanwan wali Sarkar.This name was given to him because many crows sat upon his head and shoulders.Sain Kanwan Wali Sarkar died in 1928. And his tomb is on the Madina Road, it is near toKutchehary Chowk. Every year Urs (anniversary) of Sain Karam Ellahi Kanwan Wali Sarkar is scheduled. And a Fair at this occasion is also celebrated.In 1838 on 3rd April in the house of Mehar Gulam Muhammad a child was born named Karam Elahi in the mohallah of Gujrat named “androny kanya nwali”Mother name was “Mai Bhollan” . He was from “Arain Khandan”. He got his early education from a “local Madrisa”, this was Islamic education, as the role of that time. Teacher of Karam Elahi was “Mian Natha” which was the “majawar” of “Chisti Badshah Mizar” which is also located in Gujrat. His education ended at the age of 16 years and on that time this education considered enough for life. After this Karam Elahi led his remaining life only in the worship of ALLAH. He was doing nothing as a job, because of this he was called as “Sain Karam Elahi”. He often gave his food to crow and because of this he is popular with the name of “Sain Kanwaan Wali Sarkar”. He died at the age of 90 years on 18th July.

The Urs of Sain Kanwan Wali Sarkar is observed every year in the local month of Sawaan. This year the Urs began on July 17. Sain Qaiser, the Gadhi Nasheen (successor) of Sain Kanwan Wali, performs the ablution of his grave as pilgrims from across the country converge on the shrine with offerings.
Pilgrims crowd the city’s streets with Garohli (a model of the shrine) processions and people both young and old perform Bhangra to drumbeats at the shrine. Makeshift shops, hotels and stalls spring up in the area adorned with colourful ornaments. Many rich people and the city’s business organisations arrange for Langar Khanas to provide food for the pilgrims. The Lucky Irani Circus and a local street circus offer amusement to the people.
Many people come regularly with great devotion to every Urs. “I have been visiting the Urs from Chiniot for the last three decades and have not missed it once,” said 66-year-old Khan Mohammed, a shopkeeper. He said he had come every year because an immediate descendant of the saint had prayed for his success in life 30 years ago. Khan Mohammed said he would continue to come every year for as long as he lived. Pilgrims come with the hope that their prayers will be granted. “I want to be a doctor. I came here with my mother to ask Sain Sahib to make me successful in my goal,” said a young girl named Lubna. The descendants of Sain Kanwan Wali Sarkar have arranged Qawaali to entertain the pilgrims. Razzaq Ahmed, better known as Faridi Qawaal, heading a Qawaal party from Faisalabad said he was visiting the shrine for the second time on the request of Sain Qaiser and refused to charge anything for his performances.
Born on April 13, 1838, the Sain’s real name was Karam Elahi, the son of Mehr Ghulam Mohammad. He was educated at home by his parents who frequently visited shrines and tombs. According to legend, Mian Mansha became his teacher and said Karam Elahi would become a great ascetic of the land and was destined for sainthood. His words turned out to be prophetic when Karam Elahi reached the ‘Khanqah’ (A Sufi monastery) of Pir Imam Shah at Chandala. Pir Imam saw the potential sainthood in Karam Elahi and ordered him to journey to Delhi barefoot for spiritual elevation. Karam Elahi obeyed the order and after accomplishing this task, was ordered to work as a labourer at a construction site nearby.
When working at the bridge, his contractor once saw that a basket Karam Elahi carried on his head was suspended above his head as if held up by an invisible being. The news of this miracle spread like wild fire in the surrounding areas. After 16 months of hard labour, Karam Elahi returned to Pir Imam Shah and was granted sainthood for successfully completing all the spiritual steps. His fame spread and people began to swarm at his Khanqah. He soon became known as Sain Kanwan Wali Sarkar because he loved crows. Even today his pilgrims bring eatables for the crows at his shrine as an act of devotion.
Sain Kanwan Wali’s many miracles are still well known amongst the locals. A well-known tale of his miracles tells of a villager who tried to drink water from the Sain’s pitcher, but was forbidden. The villager said sardonically, “You are referring to the well as if it is full of milk.” The saint replied, “Go and you will find the well full of milk.” The villager did indeed find it filled with milk and many villagers came to drink the milk. It is said the local deputy commissioner and health officer also visited the well and examined the quality of milk, declaring it pure and hygienic. The milk turned into lassi after a day and then back into water.
Another legend tells of a poor woman, Noor Begam of Madina Syeddan, who came to Sain Kanwan Wali asking for a job for her son. The Sain gave her 16 paisas and sent her home. After a few days her son was employed for a salary of 16 rupees, which was a considerable amount at the time. Alam Fakiri in his book ‘Sain Kanwan Wali Sarkar’ narrates that a Sikh once visited the Sain asking him to pray for the release of his five friends arrested for murder. Sain Kanwan Wali began to beat the Sardar with a baton and the man took to his heels after being hit four times. The Sain called after him saying, “Take a fifth stroke of the baton.” The next day, four of the men were acquitted, but the fifth was sentenced to death. Sain Kanwan Wali Sarkar died on July 20, 1930, but he still holds an important place in local folklore. 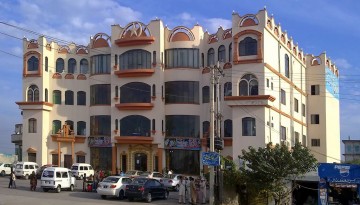